You’ve survived the crowds to see one of the wonders of the world (the Taj in Agra), now it’s time to rest your weary feet at a desert Oasis.  For us, that oasis was The Pugmark adjacent to Ranthambore National Park.  But don’t get too comfy, because you’re there for only one reason – to see the tigers!

I asked my MIL what two words she would use to describe the Hotel and National Park.  She said:

“Peaceful. Peaceful even though a tiger was within reaching distance.” – My MIL

First deemed a game reserve in 1955, then the home of Project Tiger in 1973, the area became a national park in 1980.  The park may be known for its tigers, (they currently claim a population of 62), but they also have a wide variety of other wildlife including: leopard, nilgai, wild boar, sambar, hyena, sloth bear, southern plains gray langur, rhesus macaque and chital. If you visit, remember that every trek is different depending on the weather, the season or simply whether or not the animals feel like getting up in the morning. 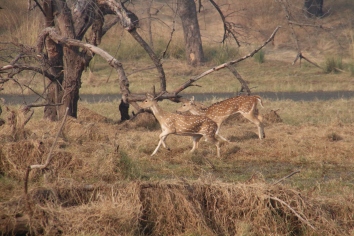 Before we even arrived, two open air jeeps were arranged to drive us around. (Though I believe the hotel can also help you with this once you’re there).  The morning of, we woke up at 6am for an early sunrise drive.  I forget if this was because it was the best for cooler weather or because it was when the tigers are most active.  Either way, we happily hopped in and drove about 5 minutes to the entrance of the reserve.  As we drove fast, slow, then fast again, our guide used a walkie talkie to discuss with other park rangers/guides if a tiger had been spotted.  Once word that one of the majestic cats had been seen, it was a mad rush to get there and jockey for a good line-of-sight among the 15 other jeeps and trucks brimming with tourists.  This ride felt more like the Indiana Jones ride at Disney than anything I have ever experienced.  At the time, I didn’t admit to my family that this was actually my favorite part, not the tigers.

After sitting around a lake and I embarrassingly mistook a bunch of leaves across the way for a tiger, we bounded off to another location and spotted one.  She seemed to be lazily sitting enjoying the day.  But after a moment, we all realized there was a deer-like animal grazing nearby.  Over the next hour or two, we watched her stalk her prey by taking a few steps forward then sitting again… two steps forward then sitting again…. all downwind of the deer.   Shockingly, the deer did not see her… that’s how slow she was moving!  The guide said that this works for the tiger about 1 out of 10 times, but that it is OK. That ratio is built into their diet.  Oddly enough, both animals seemed so used to the jeeps (and the jeeps remained far enough away) that we didn’t seem to factor into their process.

At some point another deer saw the tiger and alerted their friend.  The deer bound off into the grass and our tiger decided to stroll elsewhere.  We thought the trip was over, but the jeeps sprung into action and found their way to a road that crossed her anticipated path.  We saw her take a little bath, spray some trees (you think a house cat can spray?  You ain’t seen nothin’ yet!) and mosey through the line of jeeps.  We were a few feet away!  She strutted her stuff and could not care less that we existed.  This was both fascinating and disconcerting.  The environmentalist in me was nagging at me, and I hoped to goodness that the safaris contribute money and interest in preserving their habitat.  I hope that the safaris are the lesser of two evils; the other evil being poachers and selfish land development.  For every human that wants to create an untouched reserve, there is a human willing to exploit it.

What to wear:  I would be a horrible travel blogger if I didn’t warn you on what to wear.  If you go out before sunrise it will be very cold, though it will heat up quickly.  Also, it’s extremely dusty – everything you wear will have a thin layer of dust on it when you return.  I also suggest bringing a scarf to cover your mouth if you think the dust will bother you.  Lastly, make sure your hair is pulled back; you’re driving fast, and it’ll get in your face.

We were back at the hotel by 9 or 10 am for a very thorough breakfast buffet.  It was my favorite breakfast buffet of the trip, because instead of doing a half-hearted attempt at American food, they embraced Indian food while having toast and hard boiled eggs for variety.  Poha is a great cross-over Indian dish for breakfast – hearty but not “strange”.

This all brings me back to the hotel…

Our little oasis.  Clean, spacious rooms open up onto a center strip of trees, flowers and adorable sitting areas.  We didn’t have enough time, but there was a beautiful blue pool.  The staff was polite and efficient.  Meals were served buffet style in a large room.  Alcoholic drinks were offered, but with a glass of wine clocking in at $13, we stuck with the 650ml Kingfisher for 400Rs ($6.50) split among 2-4 people.  Honestly, we were sad that we couldn’t spend another day there just to relax. 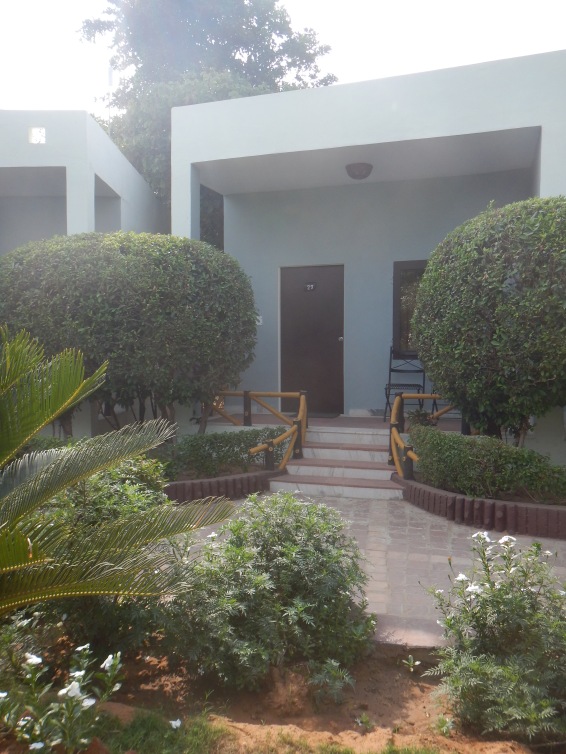 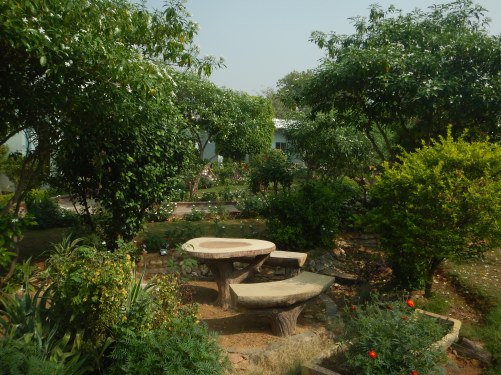 We left by noon to reach our next destination – Jaipur- a city very close to my heart.